The Illuminations to celebrate Napoleon’s surrender in 1814


I have seen several bloggers and writers who have made the assumption that ‘illuminations’ referred to fireworks, but this is not actually the case.  The earliest reference to illuminations and fireworks that I could find was in 1717, in a letter from Fox, reported in the newspaper, viz:

Yesterday being the Prince’s Birth-Day, the Arch-Bishop of Canterbury, the Lord Chancellor, the Nobility and Gentry, with the Foreign Ambassadors in town, went to St James’s, to congratulate his Royal Highness; and in the Cities of Westminster and London, there was Bon-fires, Fireworks and Illuminations in an extraordinary manner in the Evening.

So what were Illuminations? As far as I can ascertain, it became custom some time probably in the late seventeenth century to celebrate nationally important events – and presumably local ones, in each town – by displaying a candle or lantern in as many windows of a house as might be afforded by the householder, showing it all lit up as a sign of approval.  As time went on, and probably in the same spirit in which one today might trace the competition in a suburban street by the increase in the level of decoration of lace curtains as one walks down the street, illuminations became in many cases more than just candles or lanterns in windows.  Houses ‘festooned’ must have had whole rows of lamps strung up outside, coloured glass doing its bit to add to the display, and by 1814 ‘transparencies’ are described, which appear to have been painted glass with wording or pictures thus painted, and lit from behind.  The Gas Company surpassed all other illuminations with their display, though it is worth noting that even gas lighting left pools of darkness, and the uncertain lighting in the shadows left by the illuminations give a sinister setting in my novel 'The Hasty Betrothal' for skulduggery to be planned.

This is the opening of the four-column description of the illuminations of the 11th, 12th and 13th of April 1814: 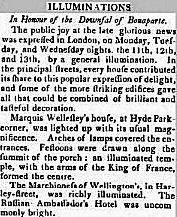 And this is an excerpt from my book now probably to be titled ‘The Hasty Betrothal’, in which the heroine enjoys the illuminations.

As it happened, Edward was also taking Letty and Beth to see the illuminations; he chose to take them to Somerset House, where the decorations were quite sumptuous, and some took the part of lit inscriptions, with the Latin tag along the front,
Europa Instaurata, Auspice Britanniae;
Tyrannide subversa, Vindice Liberatis.
“I may have little Latin, but even I can puzzle that out,” said Beth.  “Europe restored, under the protection of Britain, tyranny overthrown, the vindication of liberty.”
“Near enough,” said Edward.  “Europe set up under the protection of Britain, Tyranny overthrown, the champion freed, as I make it.”
“I like the pictures better,” said Beth, pointing to another building that displayed an illuminated painted transparency caricature of Bonaparte, tumbling from the mount of Republicanism into the arms of a demon.  “Why does it say ‘To Hell-bay’?”
“No idea,” said Edward, “unless it’s a forced pun on the name of the island he is to be exiled to, Elba.”
“It’s not a good pun if so,” said Beth, disapprovingly. “But an amusing idea to have him tumble from hubris.”
They wandered the streets, exclaiming at the ingenuity of some of the illuminations, expressions of loyalty to the King and Regent, as well as praising Wellington, expressions of support to the House of Bourbon, and a myriad of coloured lamps as well as transparencies.
Edward was insistent that the ladies should repair with him to Fleet Street.
“The Knight’s Gas Company have a most ingenious display,” he told them.
Beth gasped as she saw what the gas company had managed, a tree made of laurel leaves and festooned with blossoms made with gas lights, and throwing all other illuminations into the shade with the unparalleled brightness of the burning gas.
“Magnificent!” breathed Beth.
“Thought you’d like that,” said Edward.  “One day, all London’s streets will be illumined with gas lighting, and it will be a much safer place to be.”
“Indeed, yes!” said Beth.  “Why, I am sometimes afraid at night of turning my foot betwixt door and carriage, without having to stop to consider the possibility of footpads taking advantage of the confusion as people seek their carriages outside a house where a ball has been held, for once outside the pool of the lights at the entrance, the darkness appears the more Stygian by contrast.  I cannot help wondering whether one of the reasons to continue a ball until dawn is to permit safer passage home for the guests, once the crepuscular gloom as the sun rises has given way to morning.”
“I wouldn’t say you were wrong at that,” said Edward.  “Worth braving the cold of the evening?”
“Eminently so,” said Beth…
Posted by Sarah at 20:18

Email ThisBlogThis!Share to TwitterShare to FacebookShare to Pinterest
Labels: my books...., Regency life