This is something of a rewrite of an earlier post, but I am concentrating on time for people in the late Georgian era, and have included a couple of useful charts for sunrise and sunset times in Britain through the year.  This is London and will vary slightly to north and south.  The whole of Britain only subtends a couple of degrees of arc, however, and for the purposes of the inexact time of the era will do just fine.

Time by the late Georgian era was no longer measured by the Church and its offices, but they happened to coincide with the times of day most people cared about – midnight, sunrise, rising time, opening of offices and shops, noon, knocking off time or sunset, which depended on the time of year which came first, and bedtime.  Recent research suggests that people of the 18th century and before may have slept for four hours, woke and either rose for a drink or engaged in sex for a couple of hours and then went back to sleep again for four hours; this is apparently a natural biorhythm.  I’m a little sceptical, myself, since the average working man would not have had ten hours overnight to play about with like that.  Possibly it may have been a pattern followed by some of the leisured classes, but Austen never mentions her characters getting up in the middle of the night, so I’m inclined to go with her.  As to natural biorhythms, once I’m off, I’m off until my alarm clock puts his soft paws on my face and bites my nose gently seven hours later.

Even in the Regency time was not as all-important as it is now.  Time nowadays is measured in nanoseconds and consumes all our lives.  Then the nearest quarter hour was good enough – and likely to be different in every village or at every church steeple by which gentlemen set their watches.  Accurate chronometers for the use of sailors had been invented in 1750 for the purposes of calculating longitude at sea, but pocket watches were not of that degree of accuracy, and nor did this particularly matter.  Especially as the time from one place to the next might be anything up to an hour different.
Country wide timekeeping only became important with the widespread use of railways; when ‘railway time’ was adhered to as the standard.
No Regency buck is going to look at his watch and say ‘it is three seventeen’; for one thing that means of expressing the time is modern, and for another it would not occur to him to be that accurate – unless he was trying to break a record driving from London to Brighton, when he would probably start on the hour or half hour in any case.  He would for every day purposes say either ‘it’s about quarter past three’ or if he was trying to hurry up the females in his life ‘hurry up, it’s coming up twenty past three already’.

The country year, in common with the medieval year, was governed by farming expediency; such religious festivals as were retained in a Protestant country were those which, like the pagan festivals, fitted in to the farming year.  Most people by now had some idea of what the date was, but most country people would still count time as being along the lines of, ‘the day after old Mrs. Scroggins slipped on the ice, which is two years since there was ice as bad as this and the river froze’.  The state of the moon would also be something more people would be aware of than in these times of street lighting, and high rise buildings that block the moon.  ‘I’ll sow my seeds on the waxing moon next month’ would be a statement that made sense to any countryman [and as a matter of interest some extensive research seems to concur with the old country saying that seeds should be sown with the moon waxing. Something to do with tidal drag.]

The farmworker’s day was determined as it always has been by the time of year; he worked from dawn until dusk. The hardest work of the year was during harvest, when the day was very long too; in winter there were less tasks to do on the land save marling it but the few animals that were not slaughtered still had to be cared for, and there was repair to tools and fences.

The year was still divided into quarters, and this was the day on which debts were settled, rents were paid, quarterly pay was given, disputes were heard by magistrates, and many fairs were held, including hiring fairs where country servants might hope to get a position.
Quarter days:
Lady Day, 25th March, held as New Year’s day until 1751 and the reason for the superstition of cleaning the grate completely on New Year’s eve [it makes sense at the end of spring to be without a fire where it does not do so in the middle of winter]
Midsummer Day 24th June
Michaelmas Day 29th September
Christmas Day 25th December

Country folk were still calculating by the quarter day up to the second world war in some places.


Moon phases as they relate to time of rising and setting.

Nothing irritates me much more than to read things like ‘the sickle moon was just rising as they went to Almack’s’
The rising and setting times of the moon are determined by the phases and though that may vary by some hours in general the following is true.

The New Moon or dark of the moon rises very early in the morning, between the late early hours and early morning and sets in the early evening.  This is only really noticeable when there is the first sliver of new moon visible.

First Quarter  rises quite early in the morning and sets sometime at or after midnight.

During each of these phases of course the time shifts slightly each day.

NOTE: tides will be high roughly when the moon is at Zenith and Nadir . This is also affected by latitude. I haven’t come across a reliable engine to do the maths for me yet.  Just please, don’t have a high spring tide, or any kind of high tide, as the sickle moon rises.  High springs are with full moon.

Note 2: the graphs are drawn by me from data in books, so please attribute me if you use them.

Email ThisBlogThis!Share to TwitterShare to FacebookShare to Pinterest
Labels: Regency life, Time in past eras

The Reprobate's Redemption is live! 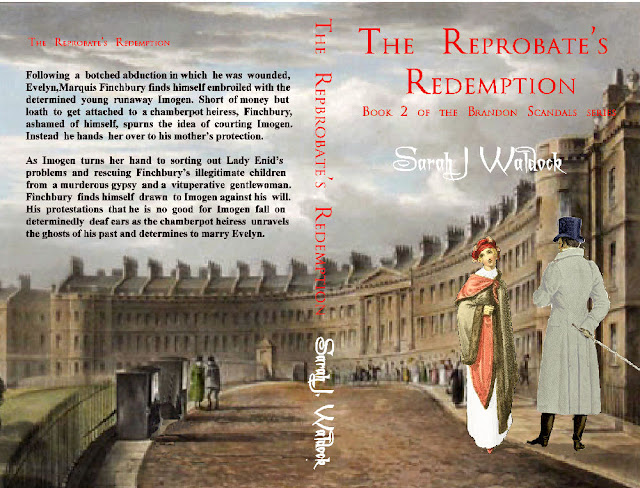 Following a botched abduction in which he was wounded, Evelyn, Marquis Finchbury finds himself embroiled with the determined young runaway Imogen. Short of money but loath to get attached to a chamberpot heiress, Finchbury spurns the idea of courting Imogen. Instead he hands her over to his mother’s protection.

As Imogen turns her hand to sorting out Lady Enid’s problems and rescuing Finchbury’s illegitimate children from a murderous gypsy and a vituperative gentlewoman, Finchbury finds himself drawn to Imogen against his will. His protestations that he is no good for Imogen fall on determinedly deaf ears as the chamberpot heiress unravels the ghosts of his past and determines to marry Evelyn.

The background picture is Bath, where Finchbury, travelling reluctantly with Imogen, meets up with his mother and her paramour, and thankfully hands Imogen over to her.  Here Imogen makes a social debut, meeting some of the younger inhabitants of the town and trying the baths with Lady Enid, the cause of whose strange malady Imogen is able to guess.  However, Enid agrees to go with her son, with Imogen in tow, to his Seat, to decide what to sell, in order to start to recoup his fortunes.  We discover a lot about Evelyn's father, all to the man's detriment, and I enjoyed writing the children so much I'm going to work them into another book in the series just for kicks and giggles.  This may delay the book involving Letty Grey, as that doesn't take place until early 1815, but it will be coming!
Fortunately I had all my weather research to hand in the writing of this, so the weather, including snow in Bath early in May  is accurate,  because it was written in the book, and sent to a friend to beta-read, before the Great Data Crash.

It's coincidental that I was involving gypsies at the same time as my friend and editor, Giselle Marks, was writing a book in which Gypsies were a major feature, so we were able to share information.  The carts of the time were not the brightly painted vardos of later times, but were more akin to the pioneer carts of the wild west, with carts hooped and covered with canvas.  The hoops, often cut from local materials at each stop, were used to make rude tents for living in.  I call them vardos for convenience, because the word isn't going to have sprung out of nowhere.
US:
paperback here
Kindle here

And the UK manages to have both on one page HERE  and I'm sorry about the price, costs keep going up with everything...  I make 27p per hard copy...
Posted by Sarah at 11:34 2 comments:

Email ThisBlogThis!Share to TwitterShare to FacebookShare to Pinterest
Labels: my books...., Regency Romance

Melinda's work may be set in the modern day, but her research is based in the past, in times of Renaissance superstition, belief in magic and vampires and so on. I have every respect for Melinda, not only for her meticulous research, but because she's writing in a foreign language.  Now I can shop in Romanian, but I couldn't write a book in it, and I raise my hat to her amazing English, which surpasses that of plenty of native speakers. 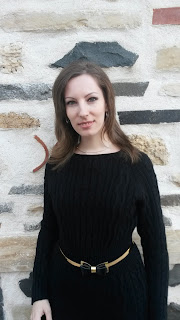 Melinda De Ross (real name Anca-Melinda Coliolu) is an international author of Romanian origin. She writes in two languages, and her books combine the elegance specific to the European style with the modern appeal of the American culture. Her favorite genre to read and write in is Romance, and anytime she prefers to watch a classic movie instead of going to a noisy club.
She loves to hear from her readers, and you can find her at:
http://melindadeross.com/
https://www.facebook.com/pages/Melinda-De-Ross/513999791983330
https://twitter.com/melinda_de_ross
https://www.goodreads.com/author/show/7163748.Melinda_De_Ross


Italian businessman Giovanni Coriola and English target-shooting trainer Sonia Galsworthy have only two things in common—a sizzling chemistry and no desire for commitment. When they meet in London, the world starts spinning faster and they quickly become addicted to each other. The incendiary passion between them skyrockets into smoldering, once-in-a-lifetime love.
Just as they thought they had things settled, a strange discovery triggers a mysterious spiral of events that puts their lives in danger more than once, with no apparent reason.
What connection could there be between an ancient amulet, a secret society and the long-dead poet Dante Alighieri? A sinister, complicated conspiracy that gradually catches up with the characters. And of course, one last twist before the ending.
*Dante’s Amulet is a follow-up of Mirage Beyond Flames.