The History of Little Fanny - the first ever dressing doll 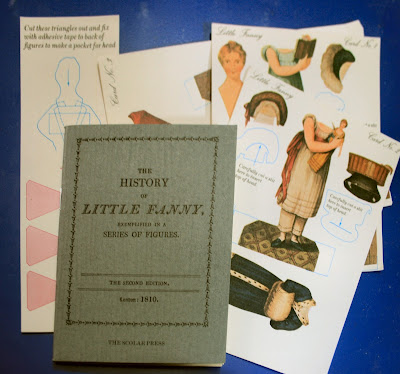 I've used 'The History of Little Fanny' in the second of my 'Charity School' series because it was published just in time for little Lucy to be given it as a gift by her father, when he returned from war and tracked her down.
I've long been a collector of dolls, including paper dolls, and I was delighted to discover this first ever cut-out-and-dress doll as early as 1810!  It differs from later dolls in the tradition, in that the head is slotted into whole body costumes, rather than being a doll in undergarments with other clothes folded on top, but it was quite revolutionary for its time.    The history itself is terribly pi and moralising, and not especially realistic, and in 'Ophelia's Opportunity', Lucy loves the doll and decides to make up her own stories that are better than the one told.
Little Fanny is a disobedient child who runs away from her nurse and gets lost, and ends up as a street urchin because she cannot find her way home, then manages to learn to work and through her industry eventually gets a job delivering a parcel to her own home, which she does not realise at first is her own home [a singularly moronic child is Fanny] but her mother recognises her and is happy to have her back, which Fanny thought would never happen.  The clothes show her riches-to-rags and back again story, and I have to say that even dressed as an urchin, Fanny is better dressed than many of the real urchins one sees over and over on cartoons of the period.

And here's a shot of some of the very sickly prose which is the right way up on my computer and firmly turns round when uploaded here.  Sorry about that, some of the other pics are not as I saved them either. 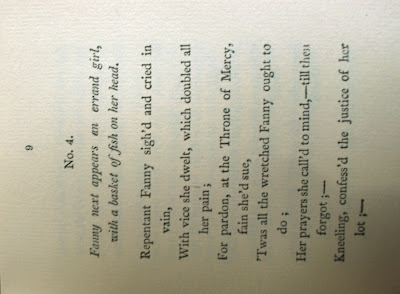 Little Fanny was followed two years later by Little Henry in America; and by the 1820's sets of dressing dolls were produced in Europe quite regularly, but as they are ephemera, I have been unable as yet to glean many details.  Fanny really is the first paper doll in the sense we think of them nowadays, as a plaything for a child.  Eighteenth century France had dolls called pantins which were much like jumping jacks, and were designed to entertain adults.  One might easily hypothesise that fashion plate figures were cut out to play with, and in 'Elinor's Endowment' I have the children do just that, to use as actresses and actors on their Lilliputian Theatre, but Fanny appears to be the first custom-made doll who can change her costume.
And thank goodness that the idea stuck, despite the story!

My copy of 'The History of Little Fanny' is a British Museum facsimile. It's possible to pick them up on Ebay occasionally as they are out of print.

Ophelia's Opportunity is out on Kindle and will shortly be in paperback HERE
Posted by Sarah at 17:58 9 comments:

Literary names for the Regency Heroine.


Literary names for your Regency Heroine

I’ve mentioned a few literary names before, but I thought I’d actually get around to a reasonably comprehensive list, with dates they are first used, since a lot of the names saddled on literary heroines grew out of the doubtless fevered brows of their creators.  After all, some of the names the writers of the late 18th and early 19th century came up with were quite as awful as modern idiocies like Chelsea, Courtney, Kasey, Janelle, Kendra. Louetta and other cruelties.
We know that Jane Austen read Richardson, most of whose characters have quite everyday names,  Charlotte Smith and Fanny Burney, and chose to name all her heroines with names from the top 50 names of the period; but sometimes there is a call for more unusual names, or for names a heroine would have liked to have been called [readers of Anne of Green Gables will recall that Anne longed to have midnight dark hair and be named Susquehannah]. And sometimes unusual names may be a literary device to show the foolishness of a parent [such as the five girls named after characters in Mrs. Williams' poems whom I feature in 'Jane and the Bow Street Runner', or a parent of scholarly but not practical turn of mind like the father of Ophelia Rackham in 'Ophelia's Opportunity' [coming soon].  A memorable name can be invaluable; Georgette Heyer's 'Frederica', 'Venetia', 'Arabella' and 'The Grand Sophy' are unforgettable books.   None of the names were in common use but none of them could be said to be too out of the ordinary, with the possible exception of Venetia.
Venetia is probably a latinised version of the name Gwynneth, and was then name of notorious 17th century beauty, Venetia Stanley. Her middle name, incidentally, was Anastasia.  In her lover's memoirs, she too has a made up pseudonym: Stelliana.  This, being shocking, is not an appropriate name to be given to any heroine!

Mary Wollstancraft: not for literary heroines but because her sister was called Everina which is fanciful enough to include here.

The Burney sisters were particularly active in naming heroines.

Sarah Burney
Clarentine/Clarentina 1798
Geraldine 1808 [also probably extant but more likely to be used in Scotland]
Adela 1810 [a name more used on the continent.]

Walter Scott
Rosabelle 1805
Rowena 1820 [an invented version of Reinwen or Rhonwen which was used in the late Middle Ages: also used in Ireland's hoax 'lost Shakespeare play' 'Vortigern and Rowena' 1796]

For older literary names:
Here is a partial list of the more exotic female names used in songs and poetry on broadsheets of the 17th century: