Book 9 of the Felicia and Robin mysteries, 'The Colour of Murder' is now live on kindle and should be available in paperback any time soon; kindle available HERE 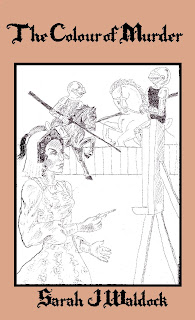 Being an artist in the Renaissance was a precarious business, and not just because one had to find a patron in order to earn by painting!  Fresco painting was the most common form of employment, but paid only a ducat a foot, four shillings and eight pence, which for the time preparing the wall and the nervous business of working onto wet plaster was low pay for an artisan for the time spent in preparation.  And an artist was an artisan; there was no sense that an artist was in any way loftier than a weaver, a tawyer or a smith.  The fortunate, and skilled, could make as much in a year as a wealthy clothier, and in Florence and East Anglia that was usually by painting wealthy clothiers....

The apprenticeship could be a nervous business, since the preparation of pigments formed a part of it.  Colours did not come conveniently in tubes as they do today, but had to be ground and mixed with oils.  Many of them were costly, like the best blue which was ground from lapis lazuli imported from what is now Afghanistan, and which had to be mixed with walnut oil so as not to become yellowed.  Cheaper blues tended to become grey with time.  The mix of the correct pigment with the correct oil, in the right quantities was something that must be learned.  And as many of the pigments were also poisonous, there was much risk in the preparation!  White lead was used, in great quantities, which could be poisonous if any should get onto a cut or lesion, and the brightest red came from cinnabar, red mercury, which was potentially poisonous through absorption through the skin itself.
Painting was not performed in the same way as it is nowadays, when colour is laid on pretty much as you want it to be; thin layers of paint from dark to light were built up, each one modifying the colour of the layers above it. Achieving a vibrant and colourful finish could be challenging, and it was easy to end up with something muddy.
The knowledge of how to use the colour layers to affect each other was vital, and some artists kept notebooks of how certain colours interacted, including the effects of the various oils with which they were mixed, as an aide memoire if they had no instinct for colour mixing.  Odd as it seems, there are people who are competent draughtsmen who cannot look at a colour in life and reproduce it precisely in paint, even without taking into account the effect of building up layers.  In such a book, an artist would also make notes about his own recipes for such things as varnishes.  Leonardo da Vinci himself did so, since when asked to paint the Pope, the first thing he did was to invent a new varnish...
Of course if the client was not satisfied, the artist might not be paid, or he might be sent on his way with blows for insolence if the sitter did not find the painting sufficiently flattering!

Add to this the reputation artists had for being a quarrelsome lot, and fond of duels, and it may be seen that a Renaissance artist could lead an exciting life even without involvement with murder and politics.

Email ThisBlogThis!Share to TwitterShare to FacebookShare to Pinterest
Labels: my books...., Renaissance art

The Bluestocking Belles have been kind enough to post a guest blog of mine revolving around my Brandon Scandals series; please find it HERE
Posted by Sarah at 17:32 No comments:

Email ThisBlogThis!Share to TwitterShare to FacebookShare to Pinterest
Labels: my books...., my short stories, Regency Romance

telling fairy tales is not limited by period...

The earliest recognisable fairy tales I've been able to track down are 12th century, a version of Little Red Riding Hood [the girl with the red cloak] being the oldest.  But stories of the fabulous have been told since time immemorial, whether the famous werewolf tale of Ancient Rome anyone who studied Latin at school has read, or the fables of Aesop, which gave their name [fabulae] to tales about talking beasts whose telling made a moral of the tale.
Which being so I am unashamedly promoting 'Fae Tales' a book co-authored with my friend and fellow Regency author, Giselle Marks, which is a collection of stories of faery tales, legends and myths set in a modern setting, and a few poems thrown in for good measure.  I posted part of one of them here earlier, about the Suffolk dragon, Here 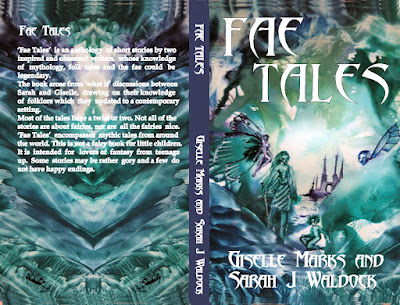 And now Fae Tales is live on Amazon as a paperback HERE or kindle HERE
As well as on local Amazon stores
Posted by Sarah at 19:34 5 comments:

Email ThisBlogThis!Share to TwitterShare to FacebookShare to Pinterest
Labels: my books...., my short stories

Lovely review on Death of a Fop, Austen spinoff

Francine Howarth, a most accomplished Regency author, has been kind enough to review 'Death of a Fop' on the Regency Reviews Magazine blog [well worth a visit anyway!] HERE.   I felt very pleased and proud, and wanted to share it.

'Jane and the Burning Question' is in train, and I have a number of other plot outlines too.
Posted by Sarah at 16:52 2 comments: