The Pedestrian Curricle, or Hobby Horse

My first introduction to this forerunner of the bicycle was in the local museum, Christchurch Mansion, in Ipswich, which has been beautifully refurbished since my childhood.  Back then it stood with a sedan chair in the passage outside the kitchen, for want of somewhere better to put it.
My later introduction to this short-lived fad was through Georgette Heyer's Frederica, the first of her novels I read, at the age of 9, and a fortuitous introduction to a rather young reader.  The adventures that Jessamy Merriville on a pedestrian curricle date the book quite accurately to 1819 and provide a hilarious interlude.

So what WAS the pedestrian curricle? 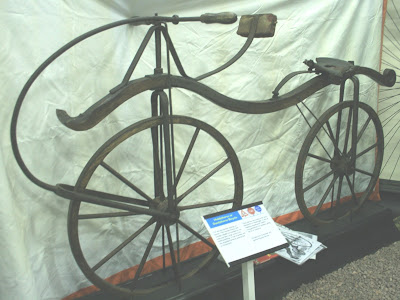 This is the one in Ipswich, which thanks to Debbie Barnes of the Ipswich Museum I was able to go and see at the Ipswich Transport Museum where it is on loan [and thanks to for the co-operation of the staff and volunteers there who organised a backcloth for me to photograph it against for clarity].

The  Pedestrian Curricle was invented by one Baron Von Drais and was introduced to England by Dennis Johnson.  One sat astride it and propelled oneself by essentially a form of gliding stride,  with which considerable speed might be obtained.
With regards to its history I can do no better than the excellent Kathryn Kane who has written it up here, the rise and here, the fall as well as in the book by Captain Roger Street to be obtained here;
The intent of this blog is to add some supplemental visual material  to Kat's blog, with the photograph of our local one and a few contemporary images.

The fad was sufficiently notorious to achieve an illustrated article in 'Ackermann's Repository' in February 1819. 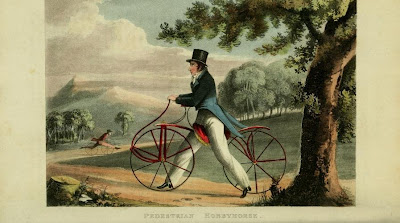 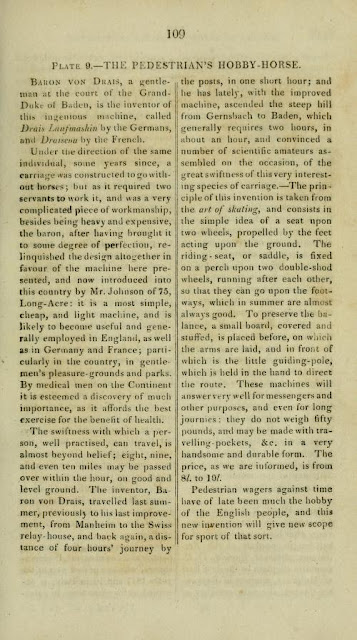 Jessamy's experience was probably not unusual, and there is an extant picture by, or after, Maurice Rousseau which appears to show some kind of school for the use of the Hobby Horse.  Note that one of the gentlemen has lifted his feet to coast; some Pedestrian curricles had places to rest the feet.  The Ipswich one does not. 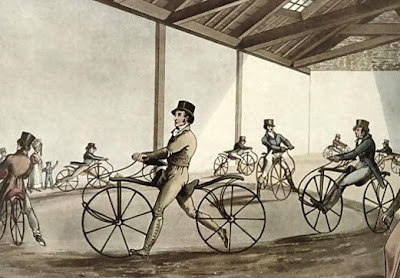