Introducing Adrian Howlett, local historian. We've all read about our favourite heroines in Bath, even in Tunbridge Wells and other spa towns.  But why have they never taken advantage of the natural springs of Ipswich?  Adrian has the answer to why it never took off.

Whilst researching the history of Holywells Park references were stumbled upon to mineral springs with healing properties and the missed opportunity for Ipswich to become a Spa Town as famous as Bath, Cheltenham or Tunbridge Wells.

The Cobbold brewing family created the myth that their springs had healing properties as they used to supply part of the town water supplies and used the water from beer, but as part of my dissertation the water was tested at Suffolk College by the Atomic Absorption spectrometer and found to have pH 7.35, lots of Sulphates of Calcium and Magnesium, undetectable iron, and nitrates at 87ppm (drinkable limit 50ppm) which meant that Holywells Water is bog standard shallow spring water.

However, there may have been reports of springs in Ipswich that were more iron rich and thus could have some tonic effect.  These iron rich mineral waters are termed Chalybeate. Sulphurous smells detected in some of the water may have a mild antiseptic effect. (Water from Woolpit Lady Well was analysed by Clive Paine and found to be rich in sulphur that could explain the historical reputation for healing eye complaints).

At the height of the Regency Spa craze, around 1814, letters appeared in the East Anglian:

1)     M.D. of Bury St Eds compares Ipswich springs to German Spa waters and says they are better than German Spa or Tunbridge Wells if drank at source (Georgians generally couldn’t bottle water as it went off after 3-4 days from bacteria)
2)     H Seekamp writes that Issac Brook, Cooper, discovered a sunken, brick arched spring in St Georges Lane that he supposed was mineral water as it had such a foul taste.  Three Doctors (including famous Dr Coyte) had the water analysed and found it to be equal to the waters of Bath – Medcalfe Russell of The Chantry had been recommended by his London doctor to go to Bath to take the waters took this water instead and was cured!

Clarke (1830) in history of Ipswich mentions another spring that never froze next to in the grounds of a cottage next to The Shears Pub on land belonging to Dykes-Alexander fairly near to the other spring.  (Dykes-Alexander’s house was at the former Bank on Barrack Corner, now converted into flats)

The water from this well was sent to London for Analysis by Mr Barry who stated that the water contained, Iron Sulphate, Iron Carbonate, Sulphurated Hydrogen (from degrading pyrites) and he saw no reason why this water and Ipswich spring waters with different properties could not be rendered serviceable and bought into general use.

A puff for 'Ipswich Spaw Water' appeared in the Ipswich Journal May 20th-27th 1721. (Puff is a term used for inflated claims for Spa water efficacy)  As the address was St Margarets Green, the source was probably one of the Christchurch springs.

Experimentally found to be good in the gravel of the kidneys, obstructions in the liver, spleen &c.  Hectic fevers, the scurvy, violent vomiting, lost appetite, the jaundice, King’s-Evil, salt and hot humours in blood, pains in stomach, frequent spitting of blood, or bleeding at the nose, diarrhoea or blood fluxes.  Sold at two pence per flask or quart, or each time of drinking what you will in the morning.  By me, JONATHAN ELMER, living on St Margaret’s Green, Ipswich.

Waters possibly from near this spring were advertised May 16-23 1724 in the Ipswich Journal ”The Ipswich Spaw Waters is now opened by Mrs Martha Coward, and Attendance will be given every Morning at the Bath on St Margaret’s Green, from 6 to 9 at One Penny per Morning, and Two Pence for each Falk (sic - Folk?) carried off.”


Apart the from Mineral Springs, Ipswich had other factors that could contribute to the building of a Spa:


These were all factors that would contribute to a successful spa as identified by Granville (1841) in his ‘Spas of England’.  What Ipswich lacked though, was grand architecture of public buildings and good accommodation: it had an Assembly Room (now a nightclub in Northgate St) though no Pump Room.  The Hotels were mostly of poor standard with The Great White Horse described as pokey by Dickens and Rochefoucauld (1784) is shocked that for a town the size of Ipswich “there is not a single inn, that is barely passable.”

Ipswich also needed Baths if it was to become a spa. It had at least two: 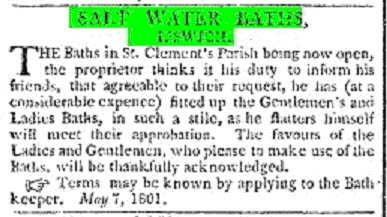 By the 1830’s it was too late as building encroachment had stopped access to the viewing point from Stoke Hills - imaginatively once compared to the Lake District by a local poet.  Factories such as ransomes employed masses of workers from the country and the building boom quickly led to gobbling up the green spaces to be replace them with rows of back-to-back housing with it’s associated overcrowding, disease, dirt and pollution.