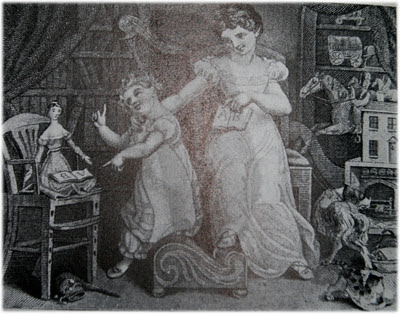 Pictures and information  taken from ‘Antique toys and dolls’ by Constance E. King Antique Toys and Dolls
Reflecting on the number and complexities of toys that many children will receive this Christmas, I wonder how many of them will be appreciated and enjoyed as much as the simpler and fewer toys of Jane Austen’s time!
One of the more sophisticated would be a brand new thing in 1817 – the kaleidoscope, invented by Sir David Brewster.  More about him and his invention here:
http://blog.mikerendell.com/
Many of the less sophisticated toys and games would be familiar to us today – though we might be surprised to find that skipping ropes were still, as in the Medieval era, confined to the use of boys, as it was considered unhealthy for girls to take such strenuous exercise.  It was now known as a skipping rope however; though the old term ‘jump rope’ continued in America.  I have seen a French print however in which the clothes appear to be around 1818-1820 where young girls are skipping; but one has to recall that the French Revolution was supposed to be for more egalité for women too! Possibly by the later period of the Regency attitudes were changing. Hoops and whipping tops were also popular.
There were definitely boys’ toys and girls’ toys as one might surmise; boys played with toy soldiers and girls with dolls. Boys also might wear miniature uniforms to pretend to be soldiers, and when very young perhaps would do so to ride on a horse like this: 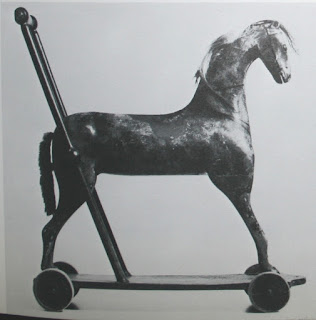 Horses of this era are more slender in body than the chunkier ones of later years. Rocking horses were also popular, and one may be seen in the nursery picture at the top of the page.
Most toy soldiers were made in Russia, Germany, Prussia or Turkey, and were flat engraved pewter figures stamped out and painted.  French made lead soldiers had been known from the sixteenth century, but they were more expensive and consequently less popular as most small boys could not build up so grand an army. The ‘flats’ were sold by the pound.  The same techniques were used for civilian figures such as skaters and circus figures, perhaps inspired by Astley’s Amphitheatre.
All right, I’m not going to pretend, it’s the dolls and dolls’ houses that are my real love.  Baby houses started life as toys for adults with costly miniatures [funny how that’s come full circle in many ways] though little girls had long been encouraged to learn the skills of housewifery with miniatures. By 1800 however the splendid cabinet houses of the previous couple of centuries had largely disappeared in favour of the baby house for the education and edification of little girls.  As today they varied from the simple to the complex. A small house may be seen in the print at the top of this page.  The picture below shows the fine façade of a house built around 1810:

I’ve always found kitchens particularly fascinating so here’s a close up of one dating originally from the eighteenth century though the figures are later.  They do not differ greatly from the Grödnertal type figures, also known as Dutch dolls, of the Regency period, similar to those dressed so lovingly by the future Queen Victoria.  Larger versions as more easily held dolls were made, carved in wood like the one in the print at the top of the page; few little girls would own anything as exquisite as the eighteenth century ivory doll below:
Though papier-mâché  was a fairly new material and some dolls were made of that as this eighteenth century example is:
More common were the wooden Grödnerthal dolls.
Wax and Parian were still largely employed only for those dolls portraying the latest fashions; and fashion dolls really deserve their own post.
Larger furniture than that for baby houses was made for dolls, a doll’s cradle may be seen in the foreground of the picture at the top of the page, and below find a day bed and a writing desk:
Toy theatres had grown from nativity scenes, and hours of fun might be had with a miniature pasteboard and wood stage and characters printed from various plays to be coloured in and cut out and mounted on spills to move onto stage from the wings to act out the plays.  Probably the more creative children made up their own plays and maybe drew and coloured their own characters. Doubtless these plays were used to entertain the whole family in an era when families had to make their own entertainment and a thespian excursion was a change from a musical evening.  Games of cards, spillikins, and board games like fox and geese also entertained a whole family.  Mother-of-pearl or bone fish were used as betting counters. Or perhaps they might play ‘The Newly Invented Musical Game, By His Majesties Royal Letters Patent, Dedicater by Permission to H.R.H. Princess Charlotte of Wales’ [c. 1801]. The picture below shows the game.  Anyone who knows how to play this, do please let me know! 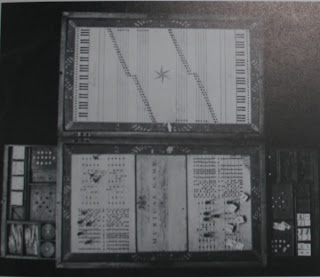 It may not have been usual for young ladies to prefer reading to cards, but children did now have their own books.  The print at the top shows an alphabet book, though many alphabet books had rhymes to help remember the letters.  Charles and Mary Lamb had re-written  the tales of Shakespeare, bowdlerised [if one may use the anachronistic word] and simplified, for children and published in 1807;  later Charles Lamb wrote in verse a translation of the tale of ‘Beauty and the Beast’ fully illustrated.  Lamb actually named the beast as ‘Orasmyn’.  This was an age in which books were produced especially for children, although only the very wealthy would be likely to own them as paper was extremely expensive and books were all hand bound.
Posted by Sarah at 21:22