The Dogs of the Medieval/Renaissance Hunt

Renaissance and Medieval hunting; the hunting dogs of the period. 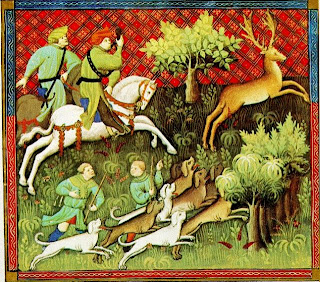 There were two forms of hunting; with stable and bow, and ‘par force de chien’, by the use of dogs.
Stable and bow meant that the hunters rode out to try to bring down their quarry with bows and arrows; it was not considered as prestigious as hunting par force which involved the huntsmen tracking the deer or other quarry by its spoor to know where to go and then setting the dogs to chase it down while the noble ‘hunters’ followed on. It was considered good sport if the chase was long, though I hate to think what all that adrenaline and hard running might have done to the meat even without our modern minds considering the cruelty of this method.  However, this was a means to fill in the idle hours for the idle rich and pragmatic consideration of the state of the meat probably did not enter into it.
The hunt was so popular that it was often celebrated in song, some of which songs, like ‘Blow thy Horn Hunter’ were allegories of the pursuit of romance in which the huntsman is in hot pursuit of a doe, harrying her until she gives up at which point he can stick his weapon in her.  Hmm, very romantic. [I’ve put the lyrics at the bottom of this blog, an excellent version may be had from Tania Opland]. Incidentally, there are a lot of medieval illustrations as tapestries and in supposedly devotional books etc which show the hunting of the unicorn; this mythical beast symbolised purity and virginity so showing it hunted is a pretty fair indication of what was intended for that as an ideal.  Unicorns, like foxes and otters, were hunted only for sport not the table.

Again, as plenty has been written about the hunt, beyond this brief introduction I thought I’d write about the dogs involved, each breed optimised for a particular quarry.  Note: there was no formal writing about breeds until 1570, so there was no particular regulation of any breed and there is a lot of uncertainty about the precise nature of many.  What may be certain is that the hounds had kennels far superior in warmth and comfort to the homes of many peasants and tender medical care few but the wealthy might hope to receive.

Alaunt/Alan  A large dog introduced from Spain, mentioned by Chaucer; were used against bears or boars.  Originally coming from central Asia they spread through Europe with the onslaught of the Vandals with the Alans which gave the dogs their name, Alaunt being applied to a working dog more than to a specific breed initially. However being bred as war dogs, protectors of families and hunters of large game a general body type became set. There were three distinct types in Medieval Europe; the Alaunt Gentil, a lither, faster variant with much in common with the greyhound; the Alaunt de Bucherie, used to guard livestock, and the Alaunt Vautre [Veantre], an aggressive hunting dog, also known as the running mastiff or as a boarhound. It was a cross between the lighter Gentil for its speed and the heavy de Bucherie.   The Alaunt de Bucherie is the progenitor of the mastiff and bull breeds. 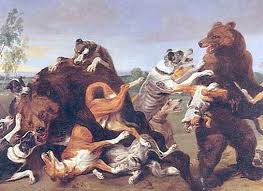 Basset  bred by monks in France to hunt rabbit in heavy cover where their short legs and powerful bodies were an advantage. ‘Bas’ means low.

Beagle This breed predates the Romans and may be very ancient indeed.  It was used to hunt the hare which does not go to ground as the rabbit does.  The beagle’s tendency to ‘sing’ when it has the scent of its prey enabled a canny hunter who knew the terrain to guess where the hare might double back.  Glove Beagles were an affectation of the 14th and 15th centuries, small enough to fit in a glove and were kept as packs; Pocket Beagles, 9” tall at the withers, were ladies’ hunting dogs and could ride in front of their mistress on the saddle.  Possibly from the Gaelic ‘beag’ meaning ‘small’.

Harrier described as ‘like a beagle on speed’; similar to the foxhound, the first documented pack was in 1260, but this breed was mostly confined to Western England and Wales.

Irish hound/ Wardog/wolf dog [Irish wolfhound] A breed whose origins are lost in the mists of antiquity, probably the hound which features in Irish folktale.

Levrier [Greyhound]  A very ancient breed; in earlier times a greyhound was worth more than a serf.  They were used for hunting and coursing because of their speed. 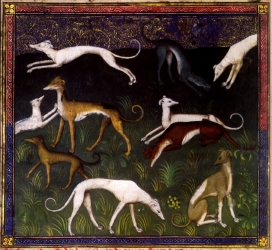 Lymer [Bloodhound] Used to hunt wild boar and stag, though sometimes replaced after 1526 by the Spanish Mastiff.  It was mostly prized for its scenting ability.  Originally called a Lymehound, the Lymer was the leash securing it to the harbourer or dog handler. 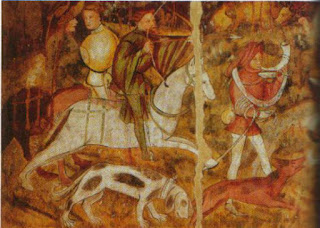 Spaniel/Barbet/Water Dog The European water spaniel was bred and refined between about 1300 and 1600.  It was used to flush game for falcons or for hounds and retrieved water birds being adept swimmers.  The original ones had the characteristic floppy ears and were black and white or liver and white.  From this was developed the Springer Spaniel around 1576. The water spaniel is a heavier bodied dog than later breeds with a coat that is more dense and may be curly rather than silky. This is logged in 1758 as the difference between a spaniel and a barbet, that the spaniel has long hair and the barbet has curly hair, though earlier there may have been no differentiation.  The barbet is a progenitor of the poodle originally called Pudel and included as one of the water dogs . A sub species of the spaniel types is the Griffon which does not have curly hair.  The illustration is usually tagged as poodle. The name Spaniel derives from the French l’espagnole, as the water dog originated in Spain and may have been developed by the Moors. 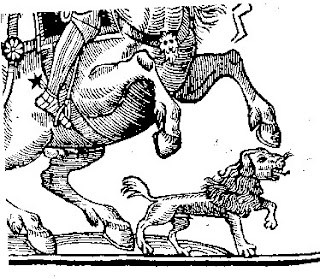 Talbot Hound brought to England from France during the Norman conquest and are considered the ancestors of the Southern Hound, the modern Beagle and the Foxhound. It was also a name often used as a given name to a dog. It is extinct today and appears to have had much in common with the bloodhound, and was probably white, being heavier in build than its descendants.

Terrier Very little different to a modern terrier.  Used to control pests like rats, rabbits and foxes; larger ones were used to hunt badgers.

Blow thy horn, hunter, and blow thy horn on high.
There is a doe in yonder wood, in faith she will not die

Sore this deer stricken is, and yet she bleeds no whit,
She lay so fair, I could not miss. Lord I was glad of it...

As I stood under a bank the deer shoff on the mede
I struck her so that down she sank, but yet she was not dead...

There she goeth, see ye not how she goeth o'er the plain,
And if ye lust to have a shot, I warrant her barrain...

To the covert both they went, for I found where she lay.
An arrow in her haunch she hent for faint she might not bray...

Here I leave and make an end now of this hunter's lore
I think his bow is well unbent, his bolt may flee no more...