the name book - at last!

Technically speaking, the first name book ... but the one I've been putting most of the research effort into over the last 8 years, and struggling to format.

I'd like to take the opportunity to thank all my multinational friends who helped, whipped me into shape, found me resources, corrected spellings, explained accents and in all added no end to the book. I love you all. And the damn thing is now published, long live the next name book NO! NO!

runs screaming from the room.
Posted by Sarah at 12:06 4 comments:

Hello all!
So I hope you are all surviving Covid 19 well enough, I feel a little bit guilty that I've been enjoying myself with the peace and quiet, to the point that I'm 2/3 of the way through my 6th novel written since March 11th. [finished the 5th on May 12th; this one is a bit slower].
So what happened?
Well, I recently discovered the band 'Sabaton', who are a Swedish metal band who write songs about historical battles, heroes and so on, and heard their song 'The Winged Hussars Arrive', about the Polish heavy cavalry who went into battle with wings. The song is about the seige of Vienna, when the then-king of the Poles, Jan III Sobieski led his men over the top of the Kahlenberg mountain to charge on the Ottoman Turks, relieving the siege.
The winged hussars arrived

And I was captivated, read more, and discovered that the Winged Hussars were disbanded in 1776, shortly before Poland, as a country, ceased to exist.
Well, that almost demanded the title 'The Last Winged Hussar' and Wojciech Skrzydło, the maverick red hussar was born.
Um...  and I might have been watching too many old YouTube Lone Ranger episodes as well. 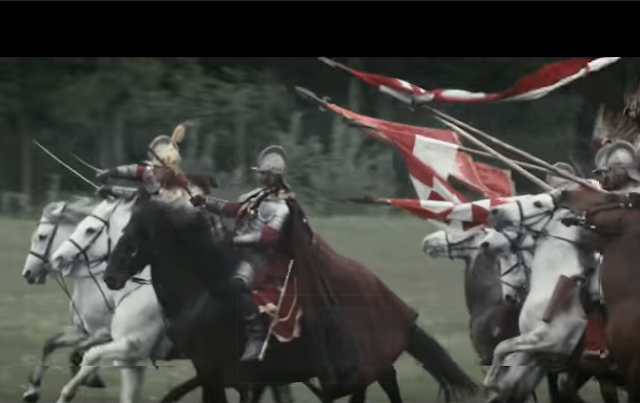 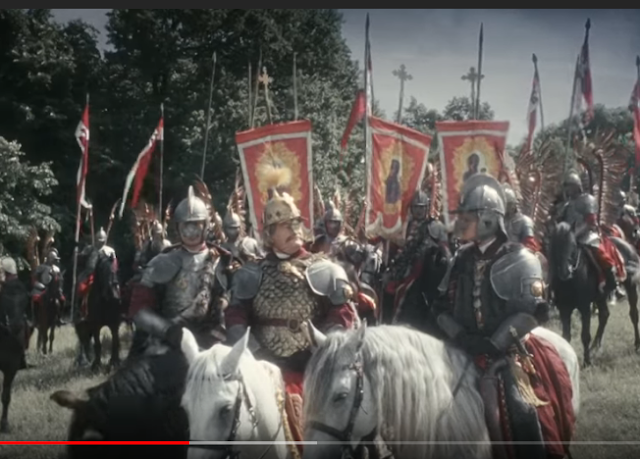 Moreover the Polish Szlachta, nobility wore such AWESOME clothing still when the rest of Europe was corseted, bewigged and looked like coxcombs, they were stalking around in comfortable looking brocaded zupans and kontuszs with outsize sabres looking like heroes. 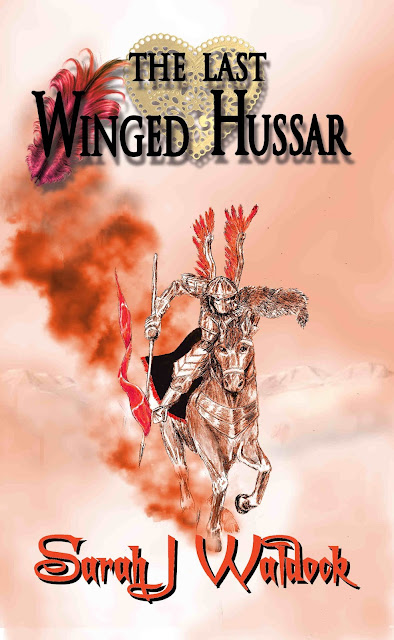 So, what's it about?

The Polish-Lithuanian Commonwealth 1776; the famed Winged Hussars, renowned for their valour and honour, have been disbanded as obsolete.
Wojciech Płodziewicz feels cut adrift.  He decides that the only way to save his honour is to continue as a lone winged knight, righting wrongs.
He does not expect, on his first mission, to discover a damsel in distress, who turns out to be extremely capable and spirited and with a personal reason to dislike the treacherous wojewoda, Władimir Trąbka.  Wojciech has sworn to overthrow and have him replaced.  Irenka goes with him when his mission is accomplished. After other adventures a final showdown with Trąbka leaves Irenka free to marry her Winged Hussar.

This has  taken so much research, and it has been the greatest fun.  Thanks to Aleksandra Leśniewska for letting me pick your brains and putting me right as needed, and thanks to Aleksandra I also finally finished the name book!  it's been a wonderful journey and I seem to be happily riding on ... and in the window my Covid rainbow has a silhouette winged hussar on it

A Regency Reticule: Stable Practice in the Georgian Era

My good friend Heather King has written an excellent book which is the vade-mecum for facts about horses in history, and this is an excerpt from it.

A Regency Reticule: Stable Practice in the Georgian Era: The following excerpt comes from The Horse: An Historical Author's and Reader's Guide. Amazon UK       Amazon US In the cou...
Posted by Sarah at 21:17 No comments:

Yup, I know it has been a while since the Brighton trip; life got busy.
Unfortunately  photos inside the pavilion are not permitted; but let me try to describe it.   However opulent you think you can imagine it is more so.
Decoration is on every surface; and golden dragons and wyverns.  I loved the 10' tall golden snaky dragons which were coiled to tuck the curtains into when they were drawn back.  And for dragons I forgive a lot of excess ... vulgar? hell yes, but it is so over the top it almost works.  When we left it was in a haze of bling overload. Though only one room was truly uncomfortable - the red reception room, which was so overwhelmingly scarlet that I fled through it in a hurry. what a way to depress pretensions of visitors you don't want!
Simon was amazed how small the grand piano was.  I was blown away by the iron pillars in the kitchen topped with cast iron palm leaves, in the semblance of trees.  I doubt servants appreciated dust catchers out of reach over where they were preparing food! 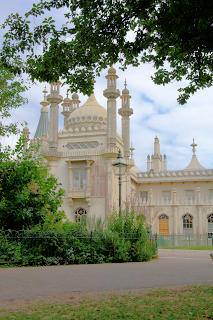 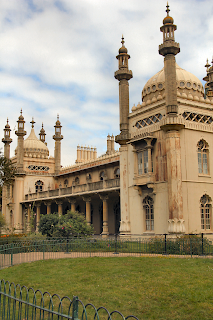 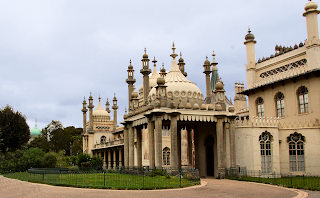 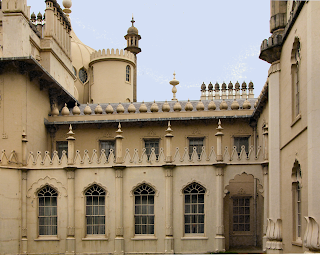 And some details of the decoration 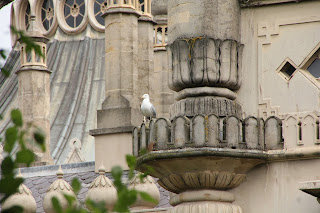 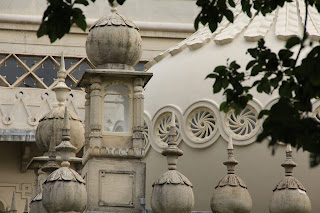 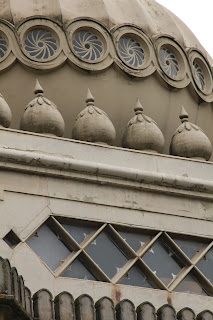 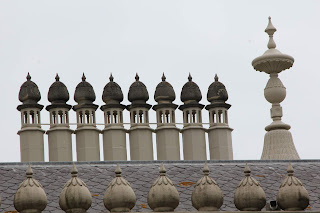 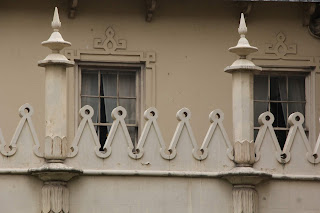