With the introduction of hair powder tax in 1795,  the whole look for men changed.  The tail coat had already crept in to replace the frock coat,  but now wigs and long hair also disappeared, and new hairstyles naturally had to be invented. Or if not invented, at least revived from the past. Even as the ladies were starting to look to the classics for inspiration in their dress and hairstyles, with the introduction of the directoire style of dress, so the men looked to the classics for hairstyles.


Other hairstyles were pioneered by men of fashion whose styles were copied. The Duke of Bedford was one of the first to wear his own natural curls, using wax to part them at one side.

I have to assume that the Stanhope Crop came from Philip Henry Stanhope, 4th Earl of Stanhope, 181-1855 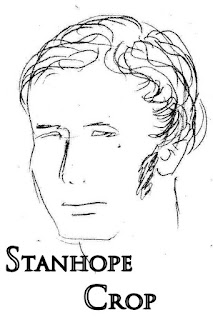 
The fashion at the time was for all men to have sideburns, which was not a word known at the time, any more than was the term 'dundrearies'.  They would have been called 'side whiskers'.