Travel in Austen's time was fraught with danger... and it wasn't just potholes

Travel was not easy in the early 19th Century; although the roads had been much improved with the toll road system, journeys were long and fraught with danger.  The coaches were not particularly well sprung, even if employing the leaf spring, and there was no means of staying cool in summer or warm in winter, though one might wrap up warm and take a hot brick for one’s feet.  The exigencies of hot or cold weather however were not the worst tricks of fate weather could throw at the unfortunate traveller, as in the story recounted below, which I recount in full because it's worth noting the heroism and kindliness shown:

Dreadful accident
A dreadful accident befell the London mail coach which left Glasgow on Tuesday, Oct. 25th [1808] the particulars of which will be found in the following letter:
“Moffat, 26th October, 1808.
“We had, yesterday, a most dreadful storm of wind and rain, and the rivers in the neighbourhood came down in torrents, such as have never been seen by the oldest people here.  Among other damage occasioned by it, we are sorry to state that a shocking accident happened to the mail coach from Glasgow to Carlisle.  At the bridge over the river Avon, about nine miles from this, at a place called Howcleugh, betwixt 9 and 10 o’clock last night, the coach had just got about half way over,  when the bridge gave way in the middle of the arch, and the coach, passengers, horses &c. were instantly precipitated into the river, a fall of about 30 feet.  There were four inside and two outside passengers.  The two outside passengers and two of the horses were killed on the spot, and the other passengers made a miraculous escape with their lives; though we are sorry to say, they were all very considerably hurt.
The coachman and guard were also much hurt; the former had his arm broken, and was otherwise much bruised, and the guard received a severe contusion on the head.
“The other coach from Carlisle to Glasgow was narrowly prevented from falling into the same precipice.  It was coming up just about the time the accident happened, and from the darkness of the night, and the rate the coach necessarily goes at, it must inevitably gone into the river at the same breach in the arch, had not one of the passengers who escaped given the alarm.
“By the exertions of the coachman and guard of the other coach, the passengers who survived (a Lady and three Gentlemen) with the coachman and guard, who had fallen into the precipice, were enabled to extricate themselves from the dismal situation into which they were thrown, and conducted to a place of safety till other assistance was afforded them.
“Much praise is due to Mr Rae, the Postmaster here, one of the proprietors of the coach, for his exertions and assistance on this occasion.  Immediately, on hearing of the accident, he set out in the middle of the night, with several of his servants and others, in two post chaises, and gave every possible assistance to the passengers, &c. and by this means, we are happy to say the London mail and other valuable articles in the coach have been saved.
“Mr Clapperton, the surgeon, is also entitled to much praise for his ready assistance upon the occasion; and the exertions of John Geddes, one of Mr Rae’s servants, are particularly deserving of notice, who, at the risk of his life, went into the river with a rope fastened to his body, and saved the life of the lady (one of the passengers) and some of the mail bags, which must otherwise have been carried down the stream.
“the coach and harness are completely destroyed.  Mr Rae has lost two valuable horses by the accident, and the other two are severely hurt and bruised.
“The bodies of the two passengers who were killed have been found, and have been brought here this morning; the are Mr William Brand, Merchant in Ecclesechan, and Mr Lund, of the house of Lund and Toulmin, of Bond Street, London.”

This does not appear to be an isolated incident as the report from the Kentish Gazette - Friday 16 November 1810 shows: 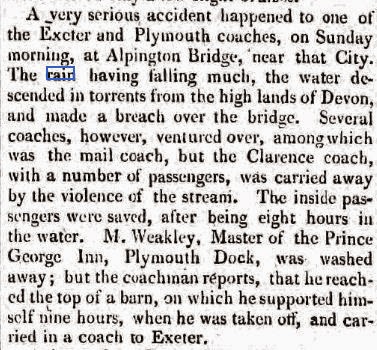 And remember the phrase in the old phrase books ‘my postillion has been struck by lightning’?  I always thought that a silly phrase until I read how many people travelling by coach WERE struck by lightning.  This example from The Ipswich Journal, Saturday 19th August 1909: 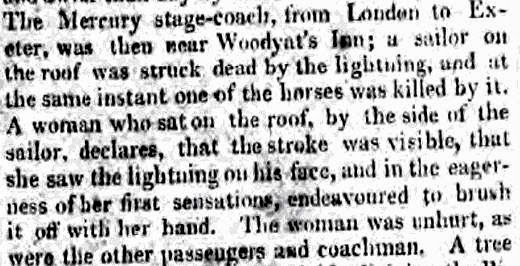 I’ve come across several incidents of carriages struck by lightning, including one where a lady passenger had her arm burned and her wedding ring melted.

The weather was not the only problem.  In Heyer one reads of  roadhogs ‘hunting the squirrel’ and trying to force carriages off the road with their own, or just driving so badly other road users are driven off the road by these rich young men in their sports cars, er, carriages.  And there are also tales of such rowdy gentlemen who insisted on taking the reins, often to the detriment of the passengers.  This report from the Cheltenham Chronicle - Thursday 13 July 1809  is an example:

Cheltenham Chronicle - Thursday 13 September 1810  tells us that there were other factors that could cause problems, here a load of sheepskins whose smell upset the horses: 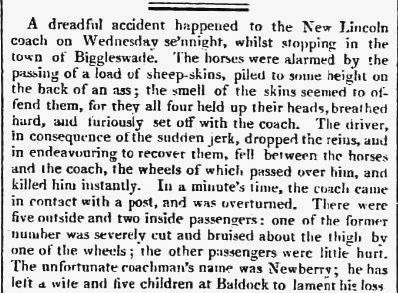 And pedestrians were not much better off, because if any vehicle went out of control they were at risk even as today when a car mounts the kerb; this sad little story from the Durham County Advertiser - Saturday 14 June 1817:

And finally, not quite a travel disaster, but one involving a horse from Durham County Advertiser - Saturday 08 April 1815: 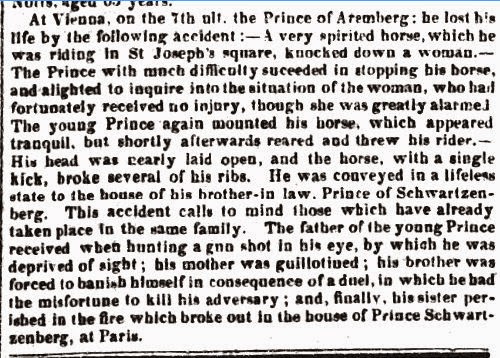 On can’t help wondering if the unfortunate horse had a burr under its saddle with malice aforethought to the unfortunate prince, especially in light of his father’s accident, and the fire.

So, how will the gentle writer use travel disaster?  Will an overturned or stranded carriage precipitate the hero and heroine together? Will a traveller in a strange land need to explain that his or her postillion has been struck by lightning? Or will a murderer or spy make use of a carriage disaster to make it seem that his victim died as a result of the accident?  Or will a jealous rival merely place a burr under a saddle, either of our hero[ine] –  or of the postillion, to make a whole coach run away?