The mysteries of sleeves and a few other arcane terms in Regency dress.

The terms by which sleeve types were described through the Regency era – which term I am using very loosely – were not always very precise or consistent.  I’ve tried to make a walk through their mysteries as clear as possible.  Not least confusing is the fact that one name is used in one period but its meaning changes in another.  Mameluke sleeves in the 1810’s are not the same thing 20 years later, when Turkish sleeves have become Mameluke sleeves and Mameluke, aka virago aka Marie sleeves are no longer in fashion…..
Just read it and weep.

The Circassian Sleeve  So, starting with the hardest to pin down…..
This appears  to be a bit of a mystery, seeming on its odd mentions to refer to two at least very different sleeve shapes; however if one traces it back to the first use in the 1790’s, it is possible to see that it referred then to a three quarter length sleeve and so it may be postulated that it referred initially to a sleeve shorter than full length – which was a new departure. The latest I have found it is in 1807 referring to a child’s dress in the October issue of ‘La Belle Assemblée’ which has ‘Circassian sleeve very short’; a sleeve which though fairly full does not look on the plate to be a puff but to be straight.
However as early as 1794 in the ‘Gallery of Fashion’ [May] ‘short loose sleeves’ are mentioned.  Circassian sleeves are mentioned on a ‘polonoise’ [sic] in April 1795 and they are unquestionably tight, and elbow length. This tallies with the definition given by the Circassian foundation of ‘a sleeve extending from the shoulder to the elbow’. This is the only definition I have come across online or in fashion dictionaries so I’m going to concur as this fits with the few fashion plates that show it – save for that anomalous  1807 one.  Which did emphasise the sleeves were very short.  Then again in June,1813, Ackermann’s Repository describes a gown with short Circassian sleeves which I should rather describe as puckered sleeves. They may have started out as straight sleeves shaped with drawing up, and that could be where the description came from?  One of life’s little mysteries.

Spanish Sleeves  A sleeve that is slashed.
Ackermann’s Repository September 1810 describes a long Spanish slashed sleeve appliquéd with white satin and edged with silver cord; antiqued laced cuffs.  The picture shows a long slashed sleeve tied at intervals.  The Spanish part of it is the slashing,. It is tied at the elbow and between the elbow and the sleeve head; lower arm and cuff details are impossible to see as a child’s figure interposes. Ackermann’s Repository April 1812 shows a Spanish slash sleeve embellished with white crape foldings; the short sleeve has crape ruffles applied down the length of the fabric puffing through the slashed sleeve.

Andalusian Sleeves
A long sleeve, with a puff at the top, which may be slashed with contrast fabric showing through, very gothic.  Written as ‘x colour Andalusian sleeve let in with y colour’.
NOTE: the use of slashed short sleeves appears in 1809 in Ackermann’s repository, March but there is no mention made of them in the description.  The following month has the description  ‘long sleeves slashed at the top’  so not yet described as Andalusian.   Presumably as slashed sleeves are Spanish this is a variant.
Sleeves with a puff at the top and no slashing may also be called Juliet Sleeves 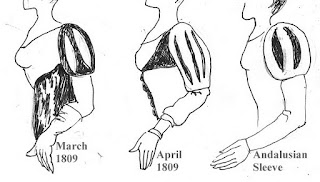 Short sleeve with full half sleeve The Gallery of Fashion August 1794 – elbow length sleeve with the upper half puffed.
Short full sleeve is a puffed sleeve.

Keyhole sleeve and Open Sleeve  Ladies Monthly Museum April 1803 shows a keyhole sleeve – the short, full sleeve appears to have been slashed three quarters of the way up the outer arm and hemmed and gathered to leave an open circular hole which may or may not be filled with an insert.  The illustration in the LMM appears to be lace. In Ackermann’s Repository June 1809 appears a child whose over tunic is described as having short, open sleeves; the opening of a sleeve on the outer side of the arm could be embellished with buttons to draw it together, and this might be worn over an undergown with long sleeves. In Ackermann’s Repository April 1810 a long open sleeve caught at five points is worn over a muslin undersleeve.  In 1813, a similar sleeve is referred to as a full slashed sleeve. 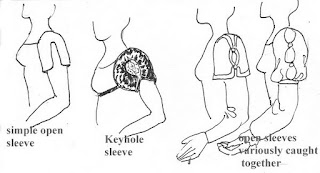 Note, a cut-away open sleeve might show a sleeve beneath that might be short or long the same colour as the petticoat which might or might not also match the bodice.  December 1815  shows a ball gown in Ackermann's Repository with such a sleeve over a short straight sleeve the colour of the petticoat which shows some 6” below the bottom of the gown. The same magazine in April 1816 shows a gown where the bodice is in the same fabric as a short open sleeve over a long sleeve in the same satin as the rest of the gown.
Melon sleeve Ackermann’s Repository October 1809 mentions a full melon sleeve nowadays called a beret sleeve; a short sleeve often used on evening dresses made from two circles of fabric seamed at the outer edges with holes cut in the centres for the arm to pass through and usually lined to stand stiffly.  Normally found after 1820 so this early instance would be interesting……  HOWEVER , I am doubtful that this was actually a melon sleeve at all! The illustration shows a short sleeve slashed and let in with a puff of a sleeve below! From which I conclude that early use of the word melon [which was an archaic word for pumpkin] referred to a puff sleeve with divisions like a pumpkin made by a slashed over sleeve.

French Sleeves In Ackermann’s Repository September 1809 the mourning dress is described as having short French sleeves.  This refers to sleeves set in with the method perhaps more familiar as raglan, ie a sleeve that extends to the neckline set in with seams slanting from underarm front and back. 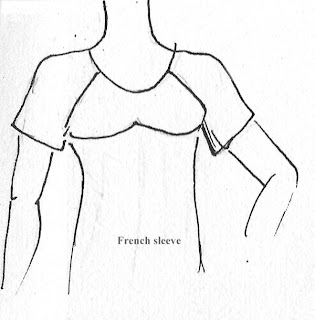 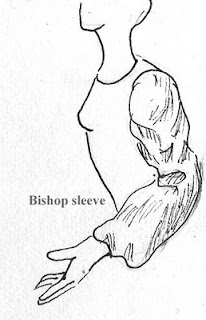 Turkish sleeve probably the same as what is later called  a Mamaluke sleeve, a full sleeve finished with a large cuff of thin fabric; particularly used in day time dresses of the late 1820’s, but mameluke sleeves are mentioned in 1816 and Ackermann's Repository September 1811 describes a full Turkish long sleeve.  See below….. 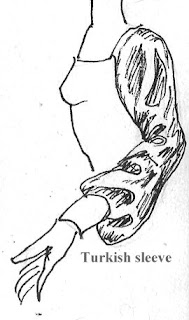 Mameluke Sleeve at this period is a long sleeve of repeating puffs down its length, banded between the puffs.  This style was another copy of a gothic style which was originally called a virago sleeve. It was also known as the Marie sleeve in the Regency just to be awkward. In Ackermann’s repository September 1812 the sleeves are clearly of this kind but are described as long full sleeves, gathered at regular distances, and ornamented with simple bows of ribbon. These sleeves are not however as extravagantly puffed as some described as mameluke and therefore are considered outside the description.  These multiple puffs were very popular in 1815. 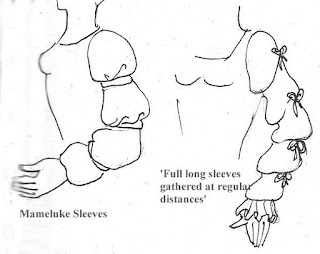 Puckered Sleeves this appears to be a gathering to the sleeve so that it puckers in horizontal lines, ie a gathering stitch is run the length of the sleeve.  This may be done to emphasise the upper sleeve or over all of it.  The full puckered sleeves, of white satin in Ackermann’s repository December 1812 shows puckering over the whole sleeve. 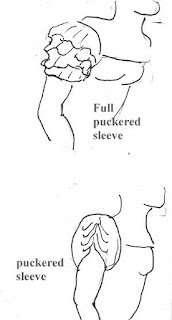 1815 saw a lot of decoration on sleeves, trimming with lace, several layers overlapping being one conceit, or a couple of layers of lace at the cuffs of long sleeves.  Ruched or goffered or pleated [called plaited] trim was de rigeur on various parts of the gown.

Interestingly, although there was a puff iron for ironing puff sleeves, all puff sleeves seem to be referred to as ‘full short sleeves’.
The method of making a pattern for a puff sleeve is very easy; after having measured the wearer and drawn up an ordinary sleeve head, the paper pattern is slashed two or three inches down at regular intervals around the sleeve head, excluding the convex curve for the front armpit. It is then laid on fresh pattern paper, the lower end pinned in place and the slashes gently eased apart and pinned, the new shape being drawn around this mutilated pattern.  The more slashes the greater the change to the sleeve head and therefore the larger the puff. Great care must be taken with gathering and setting in the sleeve to make sure it goes in evenly.  Basting is definitely recommended.

Note: apart from the French Sleeve, most sleeves were easily detatched, so that they might be exchanged with others to refurbish a gown, or change its use from half-dress, perhaps, with long or elbow length sleeves, to full-dress with short sleeves; or to accommodate new kicks of fashion.  Equally the embellishment of an oversleeve might be removed to render a gown less decorated.  For a full sleeve, one presumes that it would be set into a band that was then added to a gown so that the fullness was dispersed evenly.

A fancy way of saying V-shaped.  Vandyke stitch is still a recognised embroidery stitch.  It may refer to lace made with v-shaped edging, or to the way a ruffle is caught around the base of a gown to add interest.  Also appliquéd fabric as a decoration. 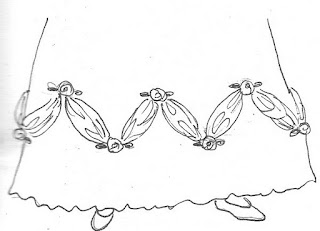 This is exactly what it says on the label – a gown that goes round the body and fastens, either at the back or down one side.
Posted by Sarah at 12:43